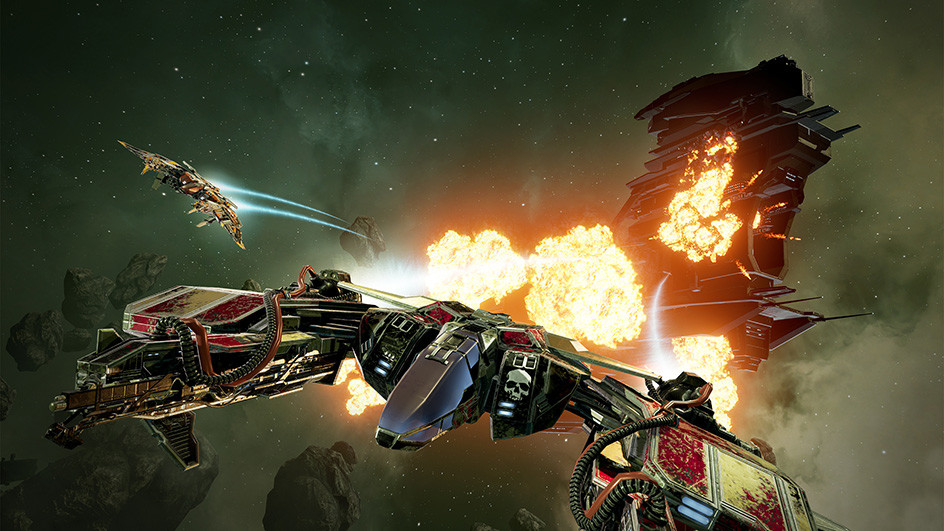 At this year’s EVE Fanfest, we’re sharing new details on Carrier Assault, one of the major features coming soon with EVE: Valkyrie’s first free gameplay update. In Carrier Assault, you’ll be running the gauntlet of your enemy's defences as you race to take out their Carrier before they take out yours.

We’ve experimented for a long time with various new game mode ideas to accompany our current Control and Team Death Match modes, to try and offer something a bit different. And the next logical step for our brave Valkyrie is to take the fight right up to the Carriers themselves. As ever, we have two teams pitched against each other, the Valkyrie who are led by Rán, and the opposing Schism team, led by Fatal.

The Stages of Battle

In order for pilots to get up close to the Carrier, its shields must be taken offline. There are three control points across the map, and if a team can take ownership of two control points, they will disable the enemy carrier shields for a limited amount of time. This stage works in the same manner as the Control game mode – each player can deploy a drone at a control point in order to capture it, but players must be mindful and protect their own drones while also destroying enemy drones if they want to successfully capture a control point.

Let’s say the Valkyrie successfully captured two control points, this now means they can attack the Schism carrier. Conversely, it’s time for the Schism to defend their carrier from the Valkyrie. Cooling Nodes are located all around the carrier, and players will have to fly in and destroy them, taking care to avoid the carrier’s turrets as well as the defending team.

If enough Cooling Nodes are destroyed, the carrier’s Core will be exposed – this is a final position near the centre of the carrier. If the Valkyrie inflict enough damage to the Core, it will go critical, destroying the Schism carrier in the process, granting decisive victory to the Valkyrie!

Breaking up Carrier Assault into stages offers a number of benefits. First, it keeps both teams roughly in the same map areas. Valkyrie and Schism will always be contesting Control points together, as well as attacking/defending the same Carrier together. In previous iterations we’ve had multiple objectives, which has led to confusion, and also instances where players on opposing teams may no longer be interacting due to different priorities. Dogfighting is still our strength and we wanted to maintain dogfights even while there are new objectives. Keeping teams close together keeps them fighting.

Secondly, having multiple stages give the opportunity for a losing battle to be turned around. The Attack/Defend stage has a limited time, after which we return to the Skirmish stage, and it’s up to both teams to contest the Control Points once again. There’s not much fun in steamrolling, and we’ve found in older experiments that the team that begins successfully always won, now we have a chance (or multiple chances) for a losing team to win everything back.

We Felt a Need…

Once we’d brought the fight to the Carriers, this presented a new issue: We had battles occurring at the farthest extremities of our maps, and it was a slog getting there. Fortunately we already had a solution from CCP BadHorse, who had made a speed boost gate some time ago to experiment with fast travel. Similar to the micro-warp drive used on Heavy ships, this gate gives a temporary intense burst of speed, allowing players to circumnavigate our maps, a fast-track to attacking the Carrier. Simple.

There’s going to be a lot more info to come on Carrier Assault, which is scheduled for release in late May or early June, as part of our first major update to EVE: Valkyrie. Until then, we’ll be looking for your thoughts and feedback on this new mode, and the team is looking forward to hearing from the community. See you in battle!