Getting started with Team Play 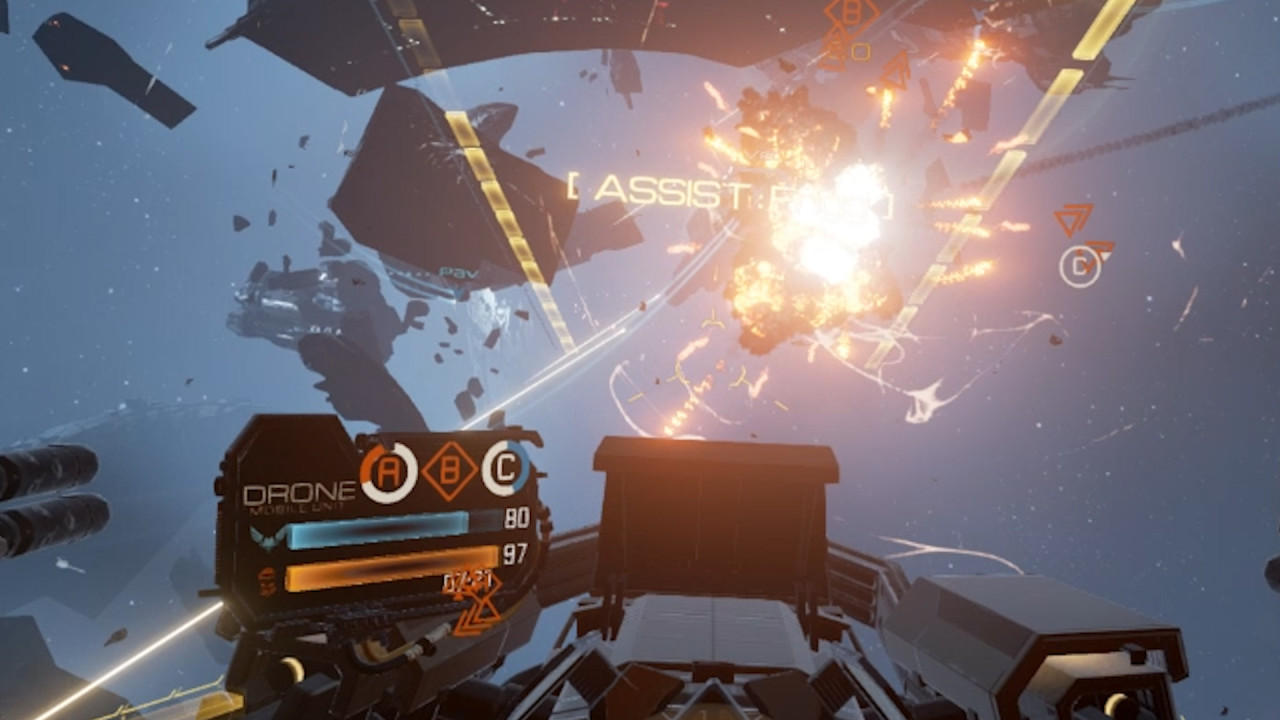 Where digital dogfighting is concerned things can rapidly spiral out of control. The best laid plans evaporate, tactics practiced are soon forgotten, while measured, considered response goes out the window. All of a sudden you’re flapping and wheeling about, squealing like a rusty hinge about, “bogies on your six” - whatever that means.

That’s why, if you’re flying into a pitched battle, you need the right team behind you. If, as a EVE: Valkyrie rookie, you step out of the relatively responsibility-free environs of solo play and join a squad of other gamers, it’s more than just your own life on the line. Remember, in team play you’ve got team responsibilities… a fire and forget approach isn’t going to turn out well.

Team play in Valkyrie can take on several different forms depending on which game mode you’re playing and what you’re expecting to go up against.

The size of your squad plays a big role too. Two- and three-man squad play options are popular, and there’s no doubt such configurations are effective and entertaining. But when four players are involved things operate a little differently. Whatever option you prefer, you’ve got a job to do and you’ll either do it well, or be a galactic-level embarrassment. To avoid such shambles, we’re teamed up with ace Valkyrie pilot General Stargazer to bring you up to speed with the art of working with squads.

“You get the most amount of fun in Valkyrie (as with most games) by staying alive for as long as possible and for that to happen you need your teammates’ support. This can come in a couple of different ways. In a two-player setup, typically having one playing support and one in a more offensive ship is a configuration that works pretty well. The support player can essentially orbit the damage-dealing ship to keep them alive. The offensive ship is free to go after as many targets as they like and, to a limited extent, be as reckless as they like about the engagement considering they have the aid of the support ship keeping them repaired. In turn, the repair ship can keep up repairs to get repair points, and they can keep an eye on their ally and advise them if they’ve got anyone on their tail in order for them to take evasive action. This is a two-way street and if the support ship itself comes under fire, it can call for aid from the offensive ship to help protect it.

While the support ship is coming under fire, the offensive ship can move to help remove the threat, but in doing so it’s important that the support pilot flies evasively as well as guiding the enemy to the offensive ship. In addition, a two-player offensive combination works fairly effectively for the same reasons illustrated above. Essentially by flying as wingmen for one another, they can help fly together and keep each other clear of targets. Also it’s possible for both offensive ships to engage targets together ensuring that they work together as an effective killing unit. Experienced heavy pilots alone are incredibly dangerous and if they have great spatial awareness it means they can be hard to creep up behind. Having one player act as rabbit being chased around while another creeps up behind the heavy to finish it off works well.”

“Things get really interesting when there are three of you working together. A three-man team comprised of two heavies and one support can be an extremely effective unit. This kind of scenario lends itself particularly well to control matches, or team deathmatch mode, though not so much in carrier assault. They have an incredible ability to defend an area of space in a setup like this, which means they can hold a control point, or join the inevitable ball of death that occurs during a team deathmatch (check out our furball jargon-busting feature right here). Two heavies are capable of looking after each other considerably well. They can maintain a heavy amount of fire and with a support looking after them they function extremely well as ‘bullet sponges’. This method of soaking up damage also leaves the enemy team quite exposed to attack, the reason being that typically, when a fighter engages a heavy, it has to fly in a straight line to ensure that its shots are landing on the heavy which exposes the fighters to other fighters that can take them out in a short fly-by. It’s also worth mentioning that the offensive/support set-up I described for two-man teams also works well in a three-player setup. Having two allies in support and one in an offensive capacity means that while one support is under fire, the second support can keep the first one repaired, or alternatively, they can band together to provide more effective support to a besieged offensive ship.”

“So, what of the four-man team? This is a little harder to deal with. Invariably, with a four-man team, the group functions better when operating as two units of two flying around together. For example, on a carrier assault or a control match, the two units can break off and go for separate points on the map to focus on claiming two control points at the same time. It helps with coordination, but they realistically function as two separate units working together to win. In team deathmatches, it’s not uncommon for a four-man team to all opt for flying in offensive ships. Having four ships’ worth of firepower aimed at one particular target means they can deal so much damage they almost vaporize the enemy off of the field. Having a target caller – someone to pinpoint the next most vulnerable target – ensures that the team works effectively. In addition, if anyone else in the squad is getting killed, it takes nothing for the rest to break off their current target and switch to a new one to ensure squad survival.
This is going to be the adopted format for the upcoming EVE: Valkyrie Tournament of Champions taking place at EVE Vegas on 29th/30th October this year so expect this to be the preferred team tactic.”

You can read more about the tournament HERE.

Wise words from Mr Stargazer there. So, if you’re about to dip your toe into the choppy waters of team play, remember, the Valkyrie family is one of the most helpful and welcoming gaming communities in the world. Don’t worry when you are dropping in for your first two-man sortie, there will be plenty of experienced pilots out there who will be happy to take you under their wing and show you how it’s done.

In closing it’s worth mentioning that team play is now even more intuitive with the introduction of the new Com Alerts feature which enables pilots on a team to quickly and easily send messages to one another about their intentions and whereabouts in any given battle.